New science building due in 2023 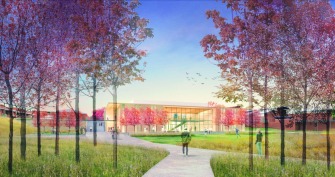 It’s been 8 years since Cape Cod Community College (4Cs) President John Cox started advocating for an upgrade of the school’s facility for their Science, Technology, Engineering and Math (STEM) students. Within the next few months, President Cox will see this project finally start to come to fruition.

In June of this year, construction workers will begin to “break ground”, according to Cox, in the area between the Frank Wilkens Building (Wilkens North) and Lecture Halls A, B and C. The intention is to clear a path for construction equipment, whose first task is to demolish lecture halls A, B and C this summer.

At the end of the 2019 fall semester, former Vice President of Finance and Operations Lisa Kopecky left her position at the college and with it, her share of responsibilities in leading this project.

“Until we find someone to fill her position, I will be taking over her role on the project and when we do find a person to replace our former Vice President, whoever that will be, will then be brought up to date on the project and take over my responsibilities,” said Cox.

With construction officially beginning at the end of this semester, the next step for the college will be to obtain the approval from the Board of Trustees for the finances of the project.

“We hope to get the voting done as early as March,” says Cox.

After receiving a $25-million grant from the Commonwealth of Massachusetts, 4Cs found itself needing to find a way to come up with the remaining $13-million to pay for the entire project. The school will be spending $3-million out of pocket, while the remaining $10-million is left for fundraising.

“We’re campaigning to receive donations from people who have, in the past, donated money to the college,” said Kathy McNamara, the CEO of the Educational Foundation at 4Cs. “Such as the Wilkens family, who have provided us with $5-million for the project.”

To go along with the Wilkens donation, a few Cape Cod-based companies have pledged funds for the project. Those companies are Cape Cod Five, Cooperative Bank of Cape Cod, Rockland Trust and two other donators who, at this point, are anonymous.

“It’s very significant to gain the generous financial support of local businesses, foundations and individuals,” said McNamara. “They are validating the importance of this project to the Cape economy.”

The timetable of this project hasn’t changed much since the previous update, last September. Assuming that the Cape does not get hit with another tornado this summer, project completion is set for Spring 2023 and the Science and Engineering Center will be fully operational in the Fall of 2023.