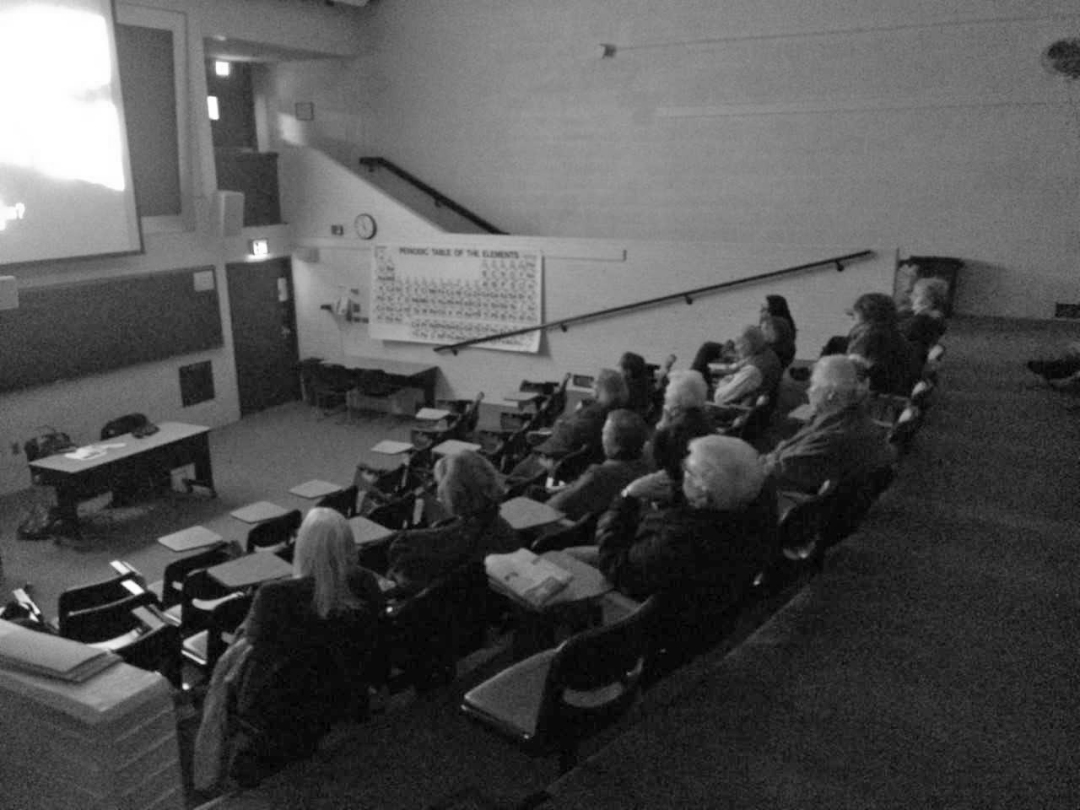 By Virgina Johnston and Mary Ventura

An inviting community gathers on campus each week in front of the big screen, ready to delve into a new culture. Old friends catch up while others open their newspapers to pass the time before the film begins. As the last few attendees shuffle in, founder of the Foreign Film Series Lore DeBower begins her prepared remarks on the Zambian film’s “exquisite use of music to underline and bring forth the storyline.” In doing so, she helps the audience find context for the foreign film. As the lights go down, DeBower suggests, “Let’s go to Zambia.”

The Foreign Films Series is a Cape Cod Community College (4Cs) class that has been organized to offer students and outsiders the chance to experience films of foreign cultures that are not easily accessible. Films take place in Zambia, Lebanon, Israel, and many other countries from around the globe.

“When you get older, at our age, you look for things to do,” said Lois Galvin, a regular attendee from Falmouth. “We’ve been coming together for seven or eight years. I even remember when the chairs croaked.”

She explained that the films shown in this series can’t be seen in regular theaters, adding that the series being free is another great advantage to those who wish to attend.

Galvin, who attends the films with her friend Adell Rawson, also chimed in to say that the series is very educational.

“I know a lot of these people by name because they do come,” said Cindy Pavlos, who has been a part of the process of premiering these films at 4Cs since 2002. “It’s a pretty faithful group, the regulars.”

The program is a free foreign film class, and every attendee is registered as a student at no cost. Each film is introduced with a brief explanation of the movie’s genre, director, or any other aspect that gives more knowledge to the viewer.

“We always want more students to come,” said Pavlos. “We have a lot more in common with each other than there are differences.”

Most of the students who come to watch are participants of the Academy for Lifelong Learning and have formed friendships with each other off campus.

The film shown on February 26, I Am Not a Witch, takes place in the south-central African country, Zambia. The film begins with culturally significant tribal music. It displays several languages including English, Chew, Bemba, and Tonga. The story is based upon a young orphan who is accused of being a witch. The young girl is named Shula, which means “to be uprooted.” Shula is submitted to a witch camp and warned that if she tried to break free, she would turn into a goat.

This motion picture is not quickly categorized as a comedy; however, some humorous undertones are incorporated. One example takes place during a serious speech, as the speaker’s phone interrupts to the tune of the nursery rhyme, Old MacDonald Had A Farm. This scene brought chuckles to the engaged audience.

“The more obscure the film, the more discussion,” said DeBower, as the audience chatted about the cliffhanger ending of I Am Not a Witch. Depending on the story, films often strike conversation and discussion among the audience after the showing.

“Films, like any other work of art, anything, give us the opportunity to walk in other people’s shoes, travel in different dimensions, experience things that in different cultures you would never be able to experience,” shared DeBower.

DeBower began the Foreign Film series in 1997. She organized the series with the intentions of bringing the community together to experience foreign cultures. To DeBower, the experience of a foreign film is, “a window into a culture that tourism doesn’t give you.”

Pavlos followed that up by stating, “Not only does it open a window into another culture, but it gives you a piece of that culture from the inside, and that’s hard to get.”

Oftentimes professors who teach a foreign language on campus will bring their students to films as a form of cultural exposure. Sometimes, viewers from other countries will request movies from their culture so that they can hear their native language again.

DeBower and Pavlos said they try not to use films spoken in English, but rather films of foreign languages with subtitles for interpretation. This means the films can be seen by anyone, and they are more inclusive for the deaf and hard-of-hearing.

When American films are shown, they fit into the theme of the month. For February, I Am Not A Witch is from the African country of Zambia for Black History Month. The film was also directed by a woman which leads into March’s theme of Women’s History Month.

Upcoming films include In Syria on April 2, Un Traductor on April 9, Back to Burgundy on April 16, Paradise on April 23, and Bye Bye Germany on April 30. A description of each film can be found on the college website. Films are held on Tuesdays at 3:30 PM in Lecture Hall A inside the 4Cs Science Building. Make sure to save the dates and enjoy free showings of culturally unique films right here on campus with the Foreign Films Series.

“That’s one of the great things about the films,” said Pavlos. “Even though you haven’t traveled there, in a way you have.”