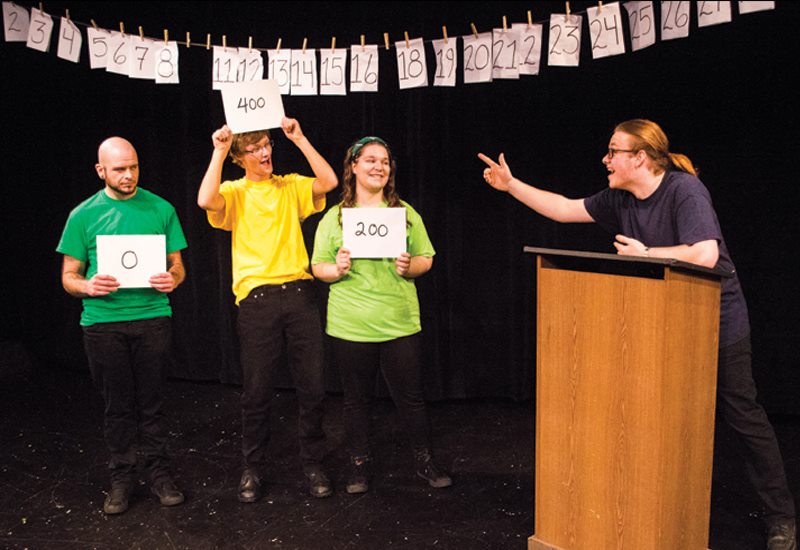 Uncanny Review for the Uncanniest Play

As I enter the Tilden Arts Center Thursday Night for the opening performance of Too Much Light Makes the Baby Go Blind, I turn right for the box office. My attention is called to a young curly blonde head excited for my attention.
“Two please,” I say.
I am instructed to role a six-sided die to determine the total cost of ticket purchase. I got 4. One student, one general admission, $26.
In the other direction, my friend and I go down the right-angels of the cement staircase.
A red shirted girl with bulbous gray headphones asks my name.
“Joe,” I say.
“What?!” the reply.
“Joe,” I say.
After which I received a white rectangle breast-covering sticker nametag labeled, “Cappuccino.”
We are directed to concessions, and welcomed in the theater. A group of actors are playing games––shouting and doing some sort of hokey-pokey. The floor of the black box theater is tagged with graffiti––rock music plays.
8 in attendance.
The clothesline clipped with papers is strung across the back wall of the graffiti floored theater.
Duck-duck goose now taking place. The audience is invited with childlike glee to join. A man––middle-aged, balding with wavy brown hair, black suit, and floral print tie––accepts. A boy with a yellow headband and t-shirt dances in the entrance.  Raucous laughter as the man is goosed––
he exits––the game goes on. The game enthusiast cast is all wearing black pants and varied fluorescent colored t-shirts. There is a digital clock in the corner of the stage––a small standing silver old radio microphone, and a low table with Wii remotes lay idle.
10 in attendance.
There is a table serving as DJ booth behind the audience seating. A boy stands glued to the wall behind it.  Rock music plays. “Duck-duck goose.” There is a violent feeling to adults playing––chasing each other full speed––duck-duck goose.
13 in attendance.
The game ends, and the cast disperses, thanking the crowd individually “for coming.”
The lights dim, and we are promised a “fantastic f***ing time.” We are given crass directions. The timer is explained. 30 play in 60 minutes––that’s it. At the beginning of a play, shout “Go;” end of play, shout “Curtain!”
19 in attendance.

The first play is selected––”Three Guys and a Doll,” cast members exit behind the screen. Three men return with a baby doll. A “baby” (doll) is toyed with and abused. The audience laughs. Yellow boy runs with the doll into the crowd, he asks––in a polite manner––to borrow an audience member’s chair. She allows. He then uses the folding chair to smash the doll repeatedly. He thanks the woman for the use of her chair, and exiting to the stage her reply, “I have to sit there now?” gets much laughter.
Play––“Macbeth”––in 5, 10 second acts.
Curtain!
34! 25! 17!
17 is chosen.
The paper with the number is crumpled and thrown at the audience. The microphone takes the stage. Disclaimers are read. The audience is instructed to “stand up,” “turn around,” “turn all the way around,” “sit back down,” “doesn’t that feel better?” Disclaimers turn to jokes, always followed by “thank you for coming.”
Curtain!
7! 9! 4!
It’s 9.
“Nine, nine, nine, nine, nine,” the paper is thrown at the audience.
Curtain!
“These Things Are True” is next––the cast takes turns saying obscure, funny, intimate statements to evoke the corresponding emotion from the audience.
Curtain!
16! 5! 12!
16’s hurled at the audience.
A one man play––the autobiography of a match being lit.
Curtain!
21 in attendance.
10! 10! 10!
10 wins.
An apology––one woman saying, “I’m sorry,” “I’m incredibly sorry,” “I feel horrible,” “I feel terrible, awful,” on like this until she destroys, berates herself into a state of despicable pity where she physically rips herself to pieces.  The audience laughs.
Curtain!
“I heard 6!”
6.
I am handed a card with the number 3, and am asked to read the questions on the back when I am told. I agree. It is a political debate. Serious questions and answers. Other audience members, I assume those holding 1 & 2, ask their questions. Answers devolve into slanderous, violent, childish remarks. Debate round two is an Olympic style wrestling match. The audience laughs.
23 in attendance.
Number! Number! Number!
Number.
“This Play Does Not Exist”
They [the performers] throw the paper at audience.
A monologue about how this play is only a rumor, it does not exist. A sudden outburst by a cast member reveals it exists, who is then dragged and beaten off stage, while the audience is assured the play doesn’t exist.
Curtain!
Number! Number! Number!
20 is picked.
“Still Image On a Wall”––a picture frame on an easel is placed center stage. A bright white light is shown center of the frame. A non-existent picture is described by a disembodied voice-over.
Curtain!
Number! Number!
Number.
A wad of paper is thrown at me. He missed.
“Guilt Away”––an infomercial that promises to take your liberal guilt away––war, starvation, human rights violations, whales––guilt from all will be removed.
Curtain!
Number! Number!
Number.
“Honestly.”
9 minutes-4 plays remain.
“The Life and Times of (something read to fast)”––piano music plays. A boy––sitting cross-legged––American flag wrapped around him; stands, a girl brings him water––music stops––he drinks––music starts; he sits.
Curtain!
Number!
4.
“Title”––a fake cement desk is rolled on stage. A woman and man stand behind it pretending to be meeting at a bar. The actors describe the meaning of the sentences that would be their conversation. Audience laughs.
Curtain!
2 plays-4 minutes left.
2!
2.
“Memorial Day”
3 minutes.
Curtain!
1:58 seconds.
“Tableau for Three”
…tic…toc.
Curtain!
24 seconds.
Audience erupts, the clapping is deafening.
A giant die is rolled by an audience member.
2.
2 plays will be swapped out for new ones to make a different show tomorrow.