“I think it really accomplished trying to raise awareness of the problem of violence against women,” said Dr. Richard Sommers, a Cape Cod Community College (4Cs) professor and trained clinical psychologist. Dr. Sommers was speaking about this year’s White Ribbon Campaign at the college, which was organized on Wednesday, March 1.

The issue of domestic violence against women hit close to home in the wake of a murder in Cotuit of a Barnstable High School special education teacher, 35 year-old Mary Fratantanio.

“You couldn’t ask for a better example of the horribleness of what happens with violence against women. Here it is locally,” Sommers said.

According to the official website, the White Ribbon Campaign is “the world’s largest movement of men and boys working to end violence against women and girls, promote gender equity, healthy relationships, and a new vision of masculinity.” The campaign spans 60 different countries and originated in Canada after a 1989 massacre of 14 women at a school in Montreal. 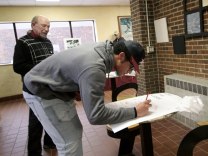 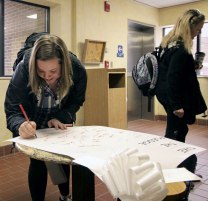 A main facet of the White Ribbon Campaign is a pledge that individuals sign. The pledge reads: “I pledge to never commit, condone, or remain silent about violence against women and girls.” In past years at the college, faculty and student organizers have collected numerous signatures for the pledge. “We had two posters, and they were filled when I left,” said Sommers.

This year, over 250 students and faculty signed the pledge, according to Officer Patrick Logan. Logan was approached to serve as co-chair of 4Cs’ White Ribbon Campaign, organizing committee, alongside Dean David Ziemba. “It was nice to be recognized as a leader in the campus community,” Logan said.

“We had a steady stream of individuals coming by,” Sommers said. He was pleased that so many male students “took that extra step” and committed to opposing and preventing violence against women. Dr. Sommers added that there were quite a few questions from these students, many of whom did not know the campaign even existed.

Quite a few women also came up to sign the pledge. “It was relatively short. They, too, want to be part of the solution,” Sommers said.
“People need to see that violence toward a domestic partner is not okay,” said John French, Chair of the Language and Literature Department. “It’s illegal, and I’m afraid in our country today, where we’ve been trying to show people that it’s not okay, there may have been some things occur recently that say to people it’s just the way that guys are.”

French continued, “A woman has the same dignity as a man has and the minute we say that this is just the way guys act, we’re demeaning the dignity of a woman.”
Organizers of this 4Cs White Ribbon Campaign are hopeful about the prospects of the campaign in the future. “As more and more individuals become aware of this,” said Dr. Sommers, “I think it’s going to expand.”

“There hasn’t been discussion about doing something every month,” Ziemba said. “For next year, we want to plan a little bit more.”